Montbozon is a village of 600 people, located in the Haute-Saône department, a few kilometers from the Doubs. The river that passes through the village is the Ognon. The village is famous for its famous pastry shop. It is classified among the new regional label of “Cités De Caractère”, replacing it with “Cités Comtoises De Caractère”. The town center is made up of large period buildings, giving the village a beautiful medieval feel.

The territory of Montbozon has been occupied since prehistoric times (a Neolithic resort was discovered there). Montbozon was once a fortified place. It is believed that it took its name around the year 800 from Count BOZON, son of Richard the Justice and grandson of Charlemagne the famous "King of the Franks", who inherited the "Mount" and the lands of Thienans, Monroz and Besnan. Montbozon being built on a height, the town was called MONT and by adding the name of the count of BOZON, it became MONT de BOZON, then MONTBOZON.

The existence of Montbozon is attested by documents written from the 12th century; it belonged to the county of Burgundy (domain of the Dukes of Burgundy) and was the seat of a châtellenie which extended its jurisdiction over 72 villages in 1789. 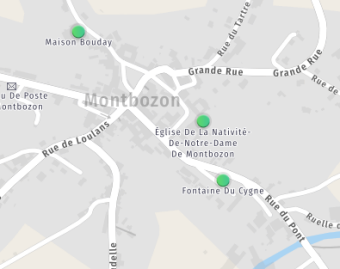 A feudal castle was built by BOZON around 950, in 1480 it was destroyed by the soldiers of Louis XII and in 1674 Louis XIV passed through Montbozon. It was at this time that the current castle was built, since it has undergone some modifications, in particular a tower is missing.

The Swan fountain, built at the foot of the castle by the architect MOREAU in 1829, is composed of a spring under a gushing flag and an elegant swan, it was classified in 1977.

A Dominican hospital was created in the town in 1450. Several houses from the 16th, 17th and 18th centuries are still visible in the village. Among them, the old Rousselot house (fortified house) is listed as a Historic Monument.

In 1597, Remond de Mesmay and his wife gave all the property belonging to them to the Jesuits of Besançon. In 1790, Montbozon lost its provost and its administrations from the old regime to become the administrative center of the new Haute-Saône canton.

Our house in pictures...

Clic on the photos to scroll and zoom

The 17th century Montbozon castle, rebuilt on the site of the old one on the banks of the Ognon.

The fountain was built at the foot of the castle in 1828 by the architect Louis Moreau. It is a semi-circular fountain with a portico made of sandstone, a stone that does not exist in Montbozon but near the Vosges, where the architect was working at the same time, for the thermal baths of Luxeuil-les-Bains.

Napoleon III, said Badinguet, made drink, it seems in this famous construction, his horse, in 1870-1871 during the Prussian campaign.

The fountain was classified as a historical monument in 1977.

The Jesuit College was built in the second half of the 16th century.

It was in 1578 that the Jesuits settled there following the donation of Remond de MESMAY. In 1764 they were expelled and in 1791 the goods were sold as national goods to Mr. FREON.

In 1833 the BOUDAY family, from the current owner, acquired the stronghold. A request for classification was made in 1996, this house is being restored.

The Dominican convent was built around 1440 by Philibert DE VAUDREY and his wife Catherine DE-RAY. In 1452 they built the church and built a hospital for 6 men and 6 women, there were 30 to 40 Dominicans.

In 1791 their property was declared national property, it is the king's prosecutor Mr BEFORT who receives them, the hospital becomes the presbytery. Since then the convent has had several owners. 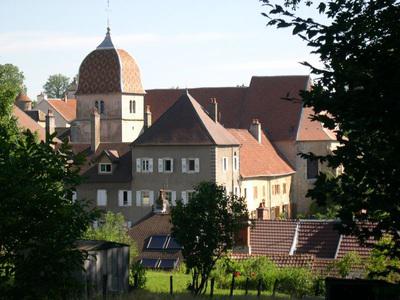 The Church of the Nativity of Notre-Dame, which was built in 1744, houses a 15th century Gothic sanctuary (relics of St SEBASTIEN). It is listed as a historical monument in 2003 on a request dating from 1960.

The typically Franc-Comtois bell tower in glazed tiles with the particularity of being rectangular (5m x 8 m); the stained glass windows, donated by wealthy families, date from 1870. The choir of the church has ceramic paving.

The church itself was partly rebuilt in the 18th century and several paintings or objects of worship are part of the heritage: you can see carved wooden stalls from the 16th century and canvases from the 17th, 18th and 19th centuries.

Montbozon is well known for its local specialty of biscuits and whose recipe remains secret.

History says that Mr. Guichard the private cook of Louis 16, after the revolution fled the court to take refuge in distant lands. His footsteps brought him to Montbozon where he stayed at the Hôtel de la Croix d'Or run by the Lanternier family. Shortly before dying in thanks for the good care received, he bequeathed to them the secret of a dessert that the Royal couple particularly appreciated and which became the "Biscuit de Montbozon".

Our house in pictures...

Clic on the photos to scroll and zoom

Montbozon offers a rich heritage full of charms, a pleasant quality of life that seeks to improve and enhance itself.

The services remain present in Montbozon and extend to the surroundings: the post office, a bank, a bakery, a pharmacy, a doctor, a dentist, a hairdresser, a Tobacconist, a mini-market, a fast food (locle, pizza to take away. ..), guest rooms, a funeral home ...

The orphanage created in 1880 welcomed children since the age of 2, it will close in 1958. It is in 1961 that it will become a family house of agriculture which depends on 2 ministries: that of national education and that of of agriculture. 380 students in alternation follow a diversified education there from the 4th to the BTS. This school grew in importance and in 2008 a second house was built for teaching public works. during school holidays, summer camps occupy the premises.

A school is attested from 1272 and it is one of the first in Franche-Comté. The girls' school was in a building built in 1845 with a pediment representing a pelican which tears out its heart to feed its young.

In 2011 the building lost its function and became a multi-reception center (crèche, day nursery) and relay for childminders.

A new educational center equipped with a canteen and extra-curricular reception replaces the school, welcoming children from 8 municipalities.

The Ognon divides the village in two and makes the happiness of the campers and the fishermen because it is very full of fish (trout, pike, carp, pikeperch, perch ...)

The municipal campsite of "between two bridges" has 33 sites, located between the Ognon and its canal which supplied the mill of the orphanage.

The municipal campsite of "between two bridges" has 33 sites, located between the Ognon and its canal which supplied the mill of the orphanage.

The nautical base offers a starting point for excursions by canoe, kayak or paddle.

A playground for children, many hiking trails that connect different points of the village as well as an acro branches park (ACRO'CIME) in the neighboring town of Thienans, complete the tourist offer.

Access to the green cycling and pedestrian path from the exit of Montbozon, a former railway line which links Vasoul to Loulans Verchamp for about 30 km. A study is underway to reach Besançon.

La "boucle des jours fous" is a walking circuit of about 5 km around Montbozon.

Do you have any question ? Want to know more about availability? Contact us using the form below

Our labels et partners for a perfect stay